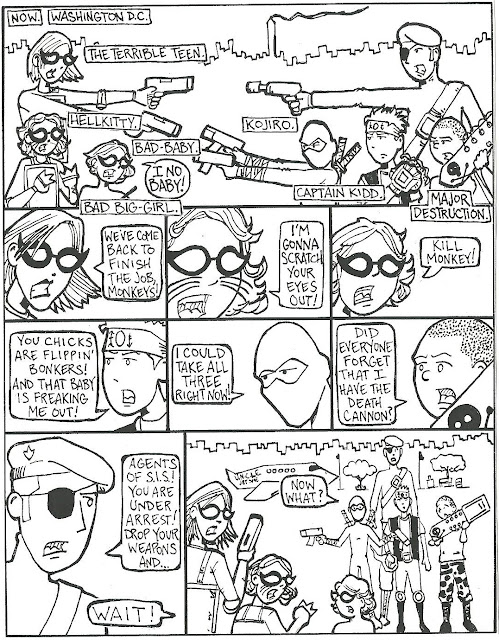 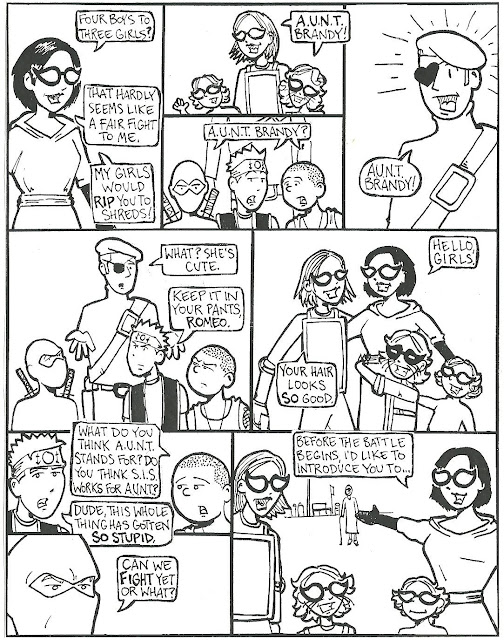 My niece, Madelyn, was 2 when I dubbed her character "Bad-Baby." By the time I was finished working on the 2nd issue, Maddy had turned 3. It seems turning 3 is a rite of passage from baby to   big-girl and she didn't appreciate being called a baby any longer.
So her character got a name change.
Page 3 introduces us to the character based on my beautiful wife, A.U.N.T. Brandy. Her costume is another example of my fear of drawing boobs. I didn't want my nephews getting little gross boners over drawings of their aunt. I didn't even want the thought crossing their minds. So, I put her in a potato sack with a belt. Problem solved.
Really, when I decided to make an A.U.N.T., I was totally beating a dead horse (which is one of my favorite kinds of comedy). After U.N.C.L.E. and S.I.S. I was just being obnoxious with A.U.N.T.
It worked out, though. A.U.N.T. has become a major player in the MonkeyVerse and next week we'll meet their heavy hitter Granmonster!
Mostly we'll talk about how I made every woman in my life a villain in my comic and what kind of fucked up dude that makes me.
Posted by DougMichel at 8:15 PM