Monkey Squad One Annual #1. Cover & The Story So Far. 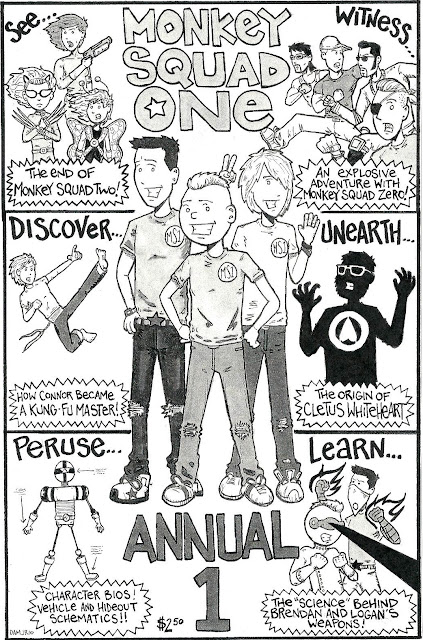 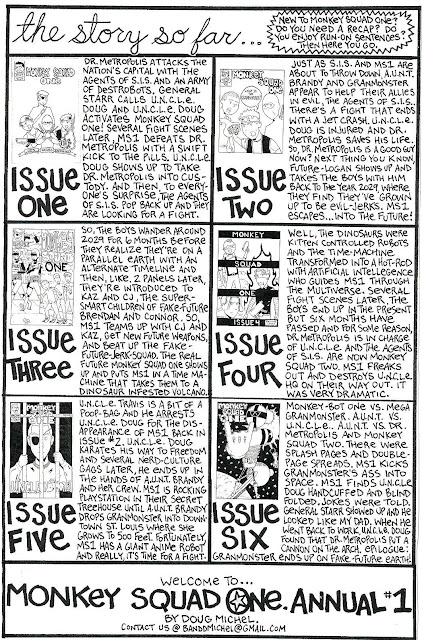 As you've read over the past year on this blog, Monkey Squad One was purely a whim (a hobby at best) at the beginning. But after 18 months and 6 issues, Monkey Squad One had become very important to me.
I was proud of issues 5 & 6 and excited about where the series was headed. The long-term plan was forming and I wanted to share the story I was telling (and am GOING to tell) in MS1 with as many people as possible.
I'd also been getting reviewed by minicomic & zine review sites. The reviews were generally favorable but several reviewers complained that no one wants to start a series with issue #5 or #6. Now the problem was that I was really embarrassed of my art in the early issues (something I've gotten over) and didn't want to introduce readers to Monkey Squad One with issue #1.

So I figured I'd do an Annual.

Annual's were my jam when I was a kid. Justice League, Superman, Spider-Man and X-Factor. Even the JSA Annuals that Geoff Johns did in the early 2000s were favorites of mine.

The whole issue is set-up to introduce readers to the MonkeyVerse.
It's worked really well.
Over 500 people have read this issue (as best I can figure) and I still give them out all of the time. Let me know if you want one & I'll hook you up.
Or I guess you can read it here at two pages a week. 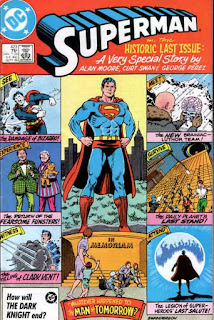 This was the first comic I ever bought. It's fucking crazy and blew my mind. If you get a chance, you should check it out.

Anyway. I'm thrilled to be posting this stuff for you guys. I love every page of this comic in particular and tried really hard on this one.

Let me know what you think!
Thanks For Reading!

TO READ THE ENTIRE ISSUE:
SCROLL DOWN AND CLICK NEWER POST.
KEEP DOING THAT UNTIL IT'S OVER.
Posted by DougMichel at 8:01 PM