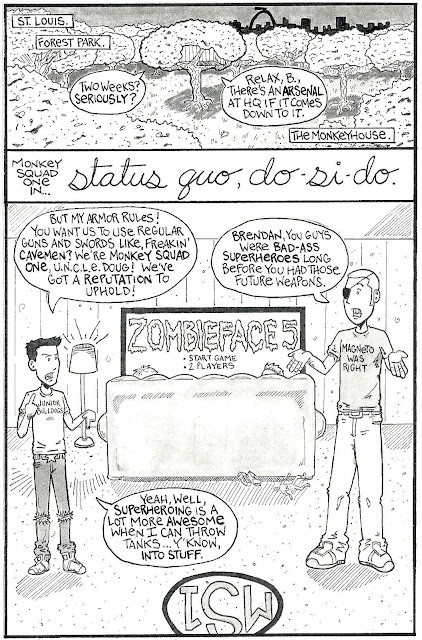 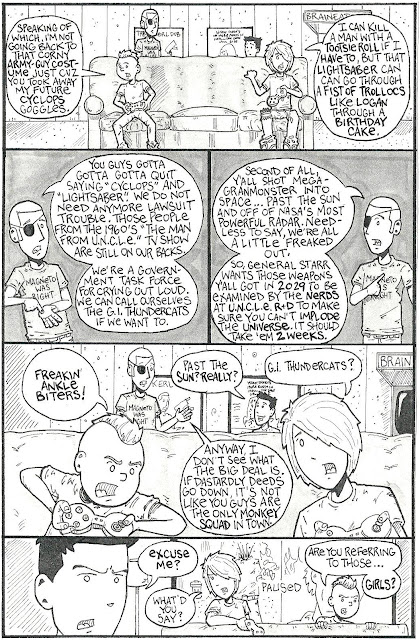 As I talked about last week, this issue is all about catching up and introducing new readers to the characters and storylines of MS1. So I'll let the dialogue speak for itself and get to the good stuff.

Real Life Brendan told me he thought his character was a nerd and a wuss.
Brendan's character in the comic had been the smartest and most mature of the team and RL Brendan just wanted his character to be cool.

So, starting this issue I do try to give these 3 boys more individual personalities but really they're all just smartasses all the time...

Oh, I should also talk about the character design updates for these guys. Logan stays pretty much the same, but Connor's gone from a ponytail/topknot thing to what his Real Life counterpart's hair looked like at the time.
And Brendan's hair's turned "black" in this issue!
This was the first issue I started using the incredible Copic markers to add grey tones to my comic!
It changed the whole look of the comic, in ways that I'm sure you'll notice in this issue.
The first is Brendan was finally able to be a brunette! I'd only used black Sharpies to "color" MS1 up until this point so a character's hair color had to either be BLACK or CLEAR and Brendan's hair had always been "clear". But now, thanks to the power of Copics, he could have "dark" hair. So if you're a eagle-eyed reader that noticed the difference, there's your explanation!

I do wanna say that the U.N.C.L.E. Doug bit about getting sued by the people from U.N.C.L.E. was a response to a review where a guy said I should be careful of the people from the old TV show because they might sue me for using "U.N.C.L.E.".

So, yes...
I use my comic to take shots at people that say stupid shit about my comic.

You have been warned.

Thanks for reading!
Posted by DougMichel at 8:26 PM