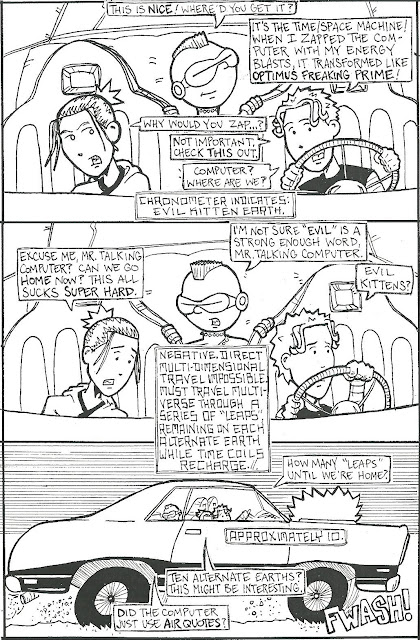 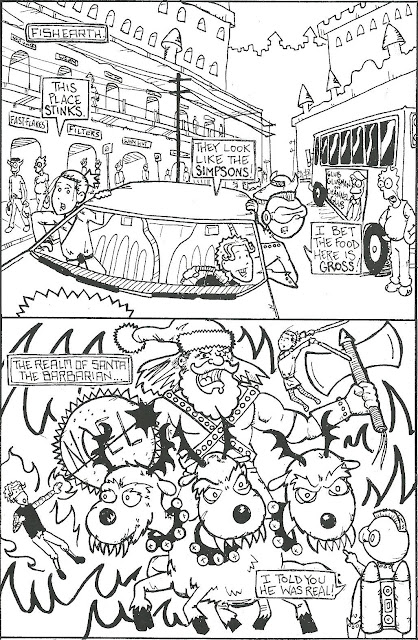 This begins one of the highlights of the whole Monkey Squad One series, if you ask me.
I was just getting my bearings with writing comics and dedicating so many pages to a multiversal adventure was a pretty big undertaking for me. I ended up having a really good time with it and was happy with how the whole thing turned out.
I hope you're happy for me.

In the process of creating the Earths of the MonkeyVerse I made some Earths that I ended up not using. I'd like to put those panels of unused worlds and a few other "deleted scenes" in an Annual someday, but I imagine when it comes down to it I'll want to put new story pages in an Annual over shit that wasn't good enough to be published the first time around. Maybe that's stuff I could post here between issues. Monkey Squad Monday exclusive content? Holy shit.

The best part of making up all of the different Earths was that I'd inadvertently set myself up for stories in the future. A big chunk of what's coming can be glimpsed in this and the next few posts.

Real-life Logan really liked the Santa The Barbarian bit.
But he was 9 back then. He's 11 now.
He'll stop giving a shit about all of this in about a year. I'll still have 6 years worth of comics to make but my nephews will lose interest long before I'm done.
I'm not typing all of this cuz it's sad.
I'm saying it's awesome because my nephews will stop paying attention to this comic before the REALLY fucked-up shit starts happening to their fictional counterparts.

Posted by DougMichel at 8:46 PM