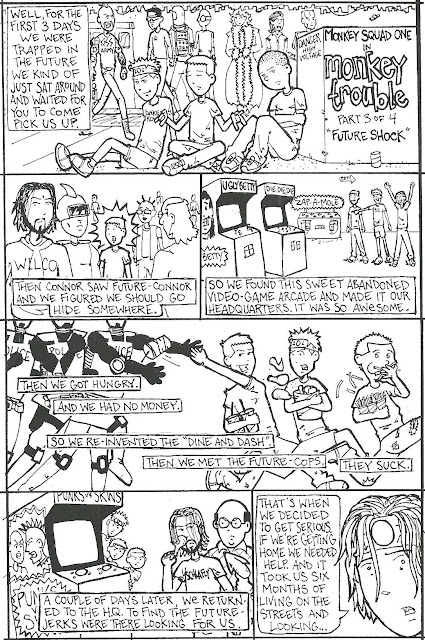 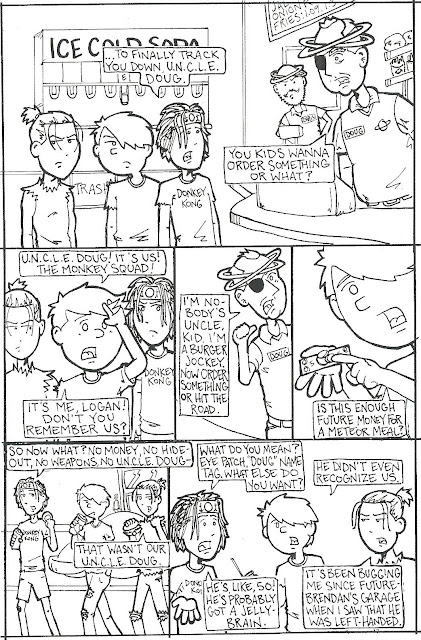 These are two pretty cool pages.
The 1st panel on page 5 is the first in-story title panel of the series. At the time I was listening to a lot of Curtis Mayfield. And I stole "Future Shock" from that dude.
Also in the background of panel 1 from R to L: Kryten, Cat, Some Future Chick, The Dude From Star Wars With the Robot Ear Things, A Spaceman, Geordi Laforge. And MotherFucking Donkey Daddy!
Readers of the Annual #1 might remember Donkey Daddy fighting Monkey Squad Zero back in 1995. Last time we saw him, he disappeared into the multiverse, swearing revenge. And here he is in 2029.
How he got to the future and what he's doing there will be revealed after Donkey Daddy returns in an upcoming issue. It's gonna be so fucked up.
Panel 2 (don't worry, I'll make it quick.) shows Future-Connor, who by this time was being modeled after my friend Jason D. Jason pointed out to me, after #2, that he & Future-Connor looked a lot alike. So, all the shirts Future-Connor wears are nods to Jason's shitty music taste and hippie lifestyle.
I like how in the Future they still have upright arcade games. With Ugly Betty & Punks vs. Skins video games.
Is it lame when I point out how funny I am?
Rasta Brendan is pretty funny.
So, the guy that's U.NC.L.E. Doug's boss at Future Burger is modeled after my old boss Chris. This was around the time that people began insisting I put them in the comic. And pitching me their hilarious super-heroes and villains. All the time. It didn't annoy me at all.
Anyway, if you haven't figured out what's going with this bizzare Future Earth yet, Connor explains the whole thing next week. But, like, don't build it up too much.
Thanks for reading!
Posted by DougMichel at 8:22 PM