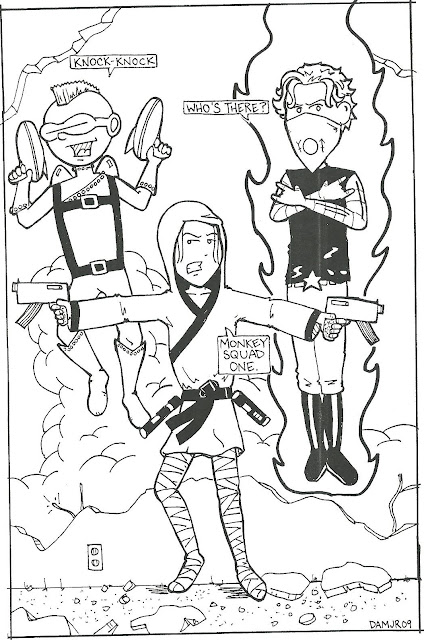 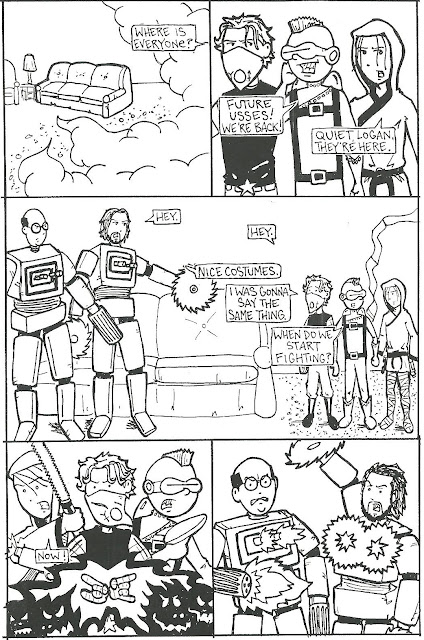 Don't think I didn't wrestle with the "Knock-knock", "Who's there?", "Monkey Squad One" bit.

I don't think I'd do a "joke" like that these days but it doesn't REALLY bother me.
But how about those costumes, huh?
I'm not sure if y'all care about this "behind the comics" kind of shit, but that's what I'm doing here, so...
Connor's a Jedi with guns. Duh.
Aside from the Cyclops goggles, Logan's costume is from a comic-book hero named Heart-Attack that I made up when I was 11. Real-life Logan had a mohawk at this point & I was stoked to be all current in the comic. And, if you remember back in issue 2, Logan asks U.N.C.L.E. Doug for a jetpack and damn it if I don't love making dreams come true. If you don't believe me, you can read it again here: http://monkeysquadone.blogspot.com/2011_12_18_archive.html
Fake-Future Brendan & Fake-Future Connor's robot suit's are also knock-offs of a character I made up in 1988 called, The American Soldier (I think). He had an American flag on his chest that flipped down to reveal twin machine guns.
It was the 80's, man. Comics were gritty like that.
Brendan's costume is just Colossus arms and the kerchief? bandana? is a nod to my un-self-published comic called "Fuck Whitey" that I made from 1998-2001. In which a character named Noah wore that same kerchief? bandana? but around his head like Danny LaRusso.
Yes, I do references to comics that you could never possibly read.
Posted by DougMichel at 8:50 PM