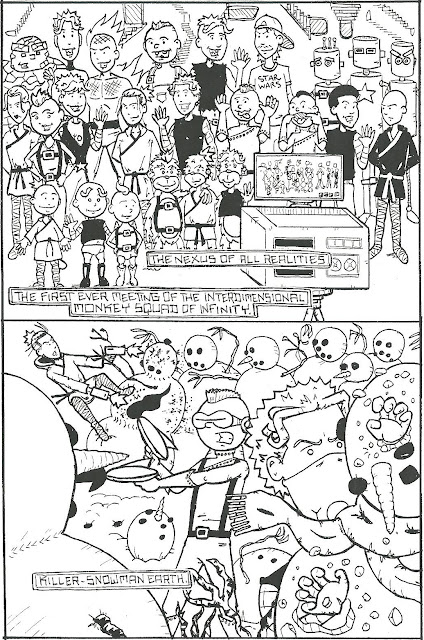 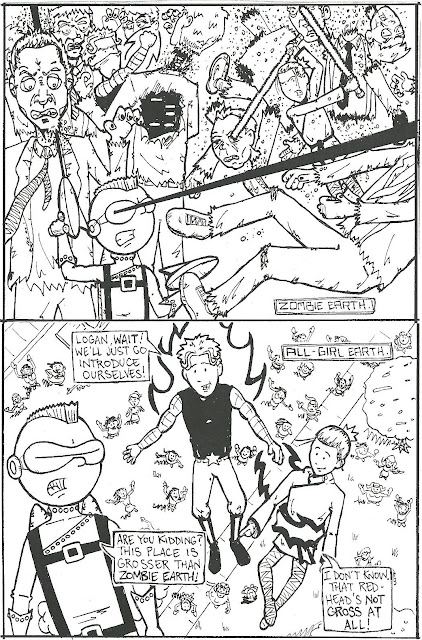 The tour through the MonkeyVerse continues!

The Nexus of All Realities is a Marvel Rip-Off (It's where Man-Thing lives). I said a few posts ago that I rip-off all kinds of shit and here's another example.

They'll all be back eventually. As to where the "nexus" is and who brought them all there, you'll find out (for the most part) in next summer's Monkey Squad One Annual #2.

But we ain't done yet, folks! That was just the 1st panel!

The Killer-Snowman Earth is a shout-out to Bill Watterson and his amazing Calvin & Hobbes.

Zombie-Earth was my response to the overwhelming demands from my nephews to put Zombies in the comic. I wouldn't be able to start the real Zombie story for another year and was tired of their bitching, so all they got was a taste.

All-Girl Earth was my attempt at embarrassing my nephews. Little did I know that it would be the setting for Monkey Squad One #10-12.

Thanks for reading! Next week: The penultimate posting for Issue #4!

Posted by DougMichel at 7:05 PM