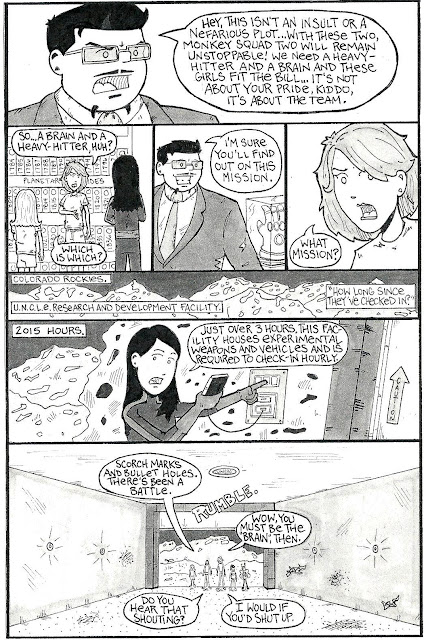 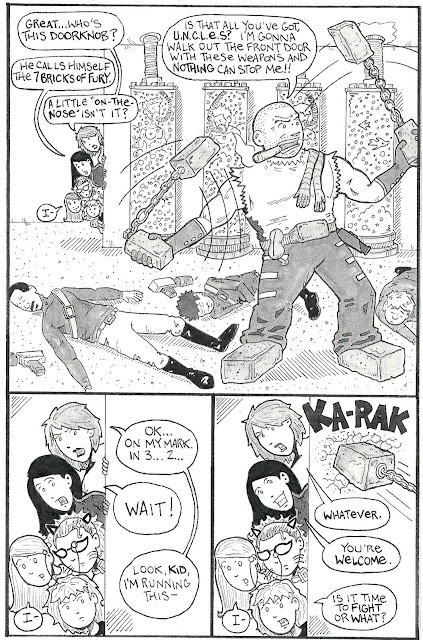 If you're the kind of comic reader that reads the word balloons and gets the gist of what's in the panel, so as to quickly move on to the next one, first off: Thanks a fuckin' lot! I tried really hard on this shit, slow down & look at the motherfuckin' craftsmanship!
Secondly, did you see the Planetary Guides or Infinity Gauntlet in the background on page 9? Huh? That's right. you've been Easter Egged.

I'm pretty sure the reason I'm so fired up is this is the 1st appearance of Seven Bricks Of Fury! This character was co-created by my good friend, Steve Chafin (follow him on Twitter) , who one day said to me something about a character  named Seven Bricks of Fury who had Brick Nunchucks, Brick Feet & smoked a Cement Cigar.

Sounded good to me.
It was the 1st time I'd let anybody else be any part of creating MS1.
It didn't hurt as bad as I thought!

These days I'm all about finding out what other artists can do with the characters of MS1! So much so, that you can expect to see an awesome Pin-Up Gallery by some very talented artists in next summer's Monkey Squad One Annual #2!

One of the artists is my old friend David Dohrmann (who you can follow on Twitter).
He did this awesome U.N.C.L.E. Doug piece in his free time with one eye closed and says he's gonna go all-out on his Pin-Up! 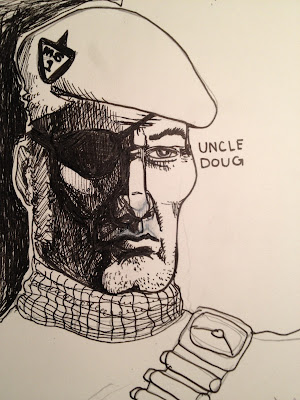 Another incredible artist involved in the Pin-Up Gallery is my good friend, Hulk Yoda (don't worry, I know his real name) who is a pretty big fan of MS1! He banged out this fantastic piece with Logana & Connor from the all new MS1 #11! 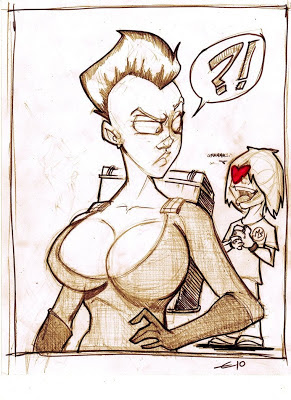 I can't wait to see what he does for the Annual!
Check out Hulk Yoda on Twitter and his page on deviantART!

NEXT WEEK: It's Clobberin' Time!

Thanks for reading!
Posted by DougMichel at 5:29 PM