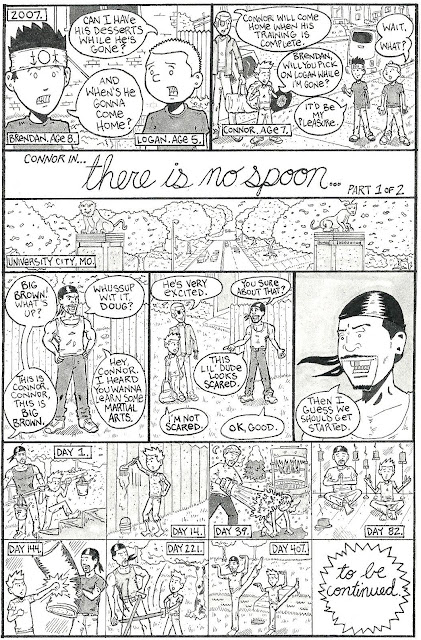 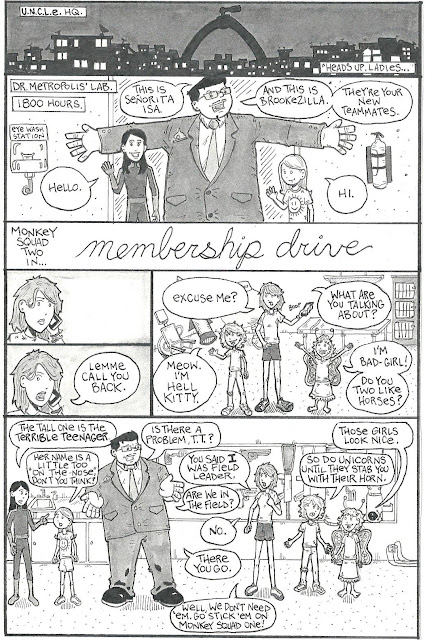 The title "There Is No Spoon" is a Matrix reference.
Duh.
Big Brown is played by my buddy, David. At the time he lived in University City, MO. But a whole lot has changed since then...

So, anyway, the training montage has references to The Karate Kid, Kill Bill & Lone Wolf & Cub (the comics, not the awesome movies). I'm a big fan of all 3.

"Recruitment Drive" features the 1st appearance of Senorita Isa & BrookeZilla.
Real Life Dr. Metropolis (Joe Metro) asked if I'd add his niece, Isabelle, to the comic and I was all for it. I needed new female characters AND I'd known Isabelle since she was a baby & it was cool to get her in the story.

Then there's BrookeZilla. Real Life Brendan asked if I'd put his little sister in the comic. Her name's Brooke and she's Brendan's dad's child with his 2nd wife. I wasn't gonna say no to the kid, so he showed me a picture & told me they called her "Brookezilla" as a baby and BrookeZilla was born.

I think it's funny there's a character in my comic based on a real person that I've never met.

NEXT WEEK:
THE FIRST APPEARANCE OF SEVEN BRICKS OF FURY!

Posted by DougMichel at 8:21 PM