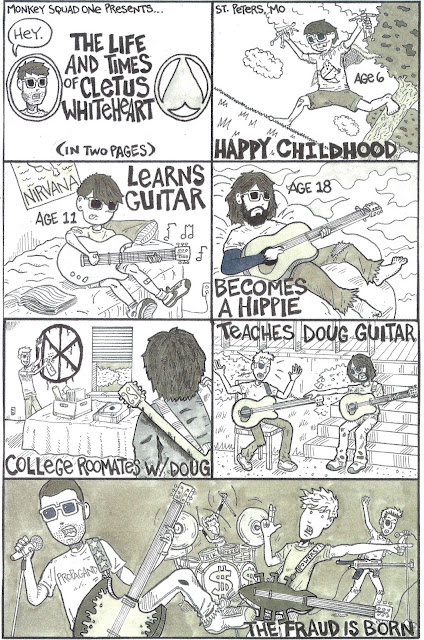 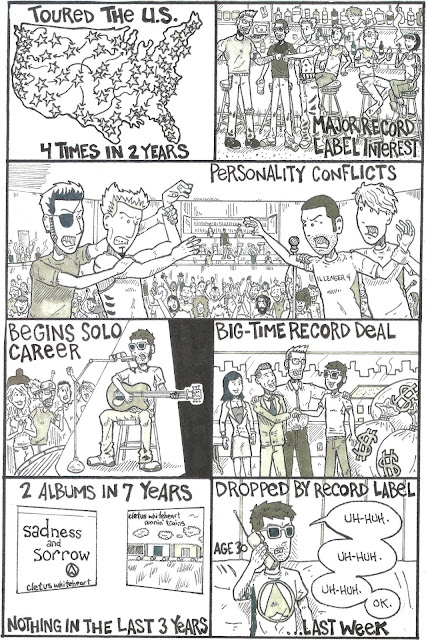 As I've mentioned time & time again, pretty much everybody in MS1 is based on, or "played by" one of my Real Life friends or family members.

Cletus Whiteheart is no exception.

I met Cletus in 2001, we both worked at a Wild Oats here in St. Louis. He's a really funny fucking dude & we pretty much hit it off right away.

Before too long, I needed a roommate & Cletus needed a place to stay & he moved in my apartment in the fall of 2002.

I guess I should say here that in Real Life, Cletus is a pretty bad-ass guitar player.

When we began living together, Cletus was 21 & coming off a long run as a super-hippie. I was 25 & clenched in the claws of punk rock. It didn't take long for Cletus to plunge into punk rock. Face fucking first.

It also didn't take long for Cletus & I to start making music together.
I had played some bass & sang in some bands in high school, so Cletus handed me a bass & we learned every Misfits & Ramones song that we could. We soon started writing songs of our own & eventually Cletus taught me basic guitar skills & I started writing songs on my own.

We called ourselves the Unholy 3 {from the DC Elseworlds story (we claimed the Devil as our 3rd member)} and we wrote a bunch of songs & learned a bunch of others & generally had a fantastic time making music & sharing the experience of creating something from nothing. Y'all that have been in bands or made music with others know that shit is pretty fucking powerful.

Cletus and I moved apart in 2006 when I got married & he went back to school to get his teaching degree.

Cletus is a teacher by day, now. But he still plays guitar and has blended punk & folk like motherfucking chocolate & peanut butter!

Figuring out how to put Cletus in the comic was no easy task. His character went through several incarnations, beginning with full on super villain & ending up with something not too far from the truth.

He's a good-guy in my book.

I've actually been drawing some Cletus Whiteheart lately. He's got a pretty big role in the upcoming Monkey Squad One Annual #2!

The Saddest Song In The Whole World!

Posted by DougMichel at 8:38 PM