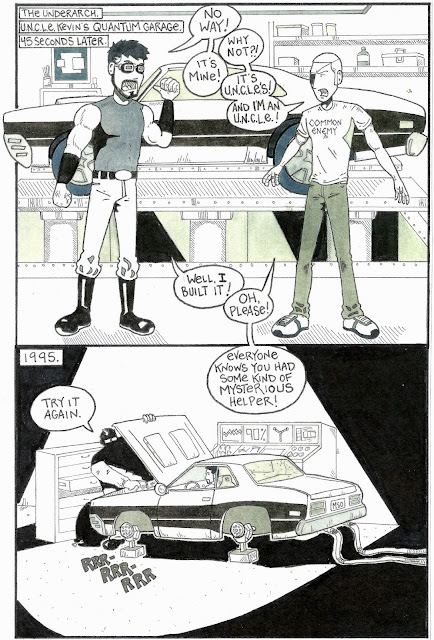 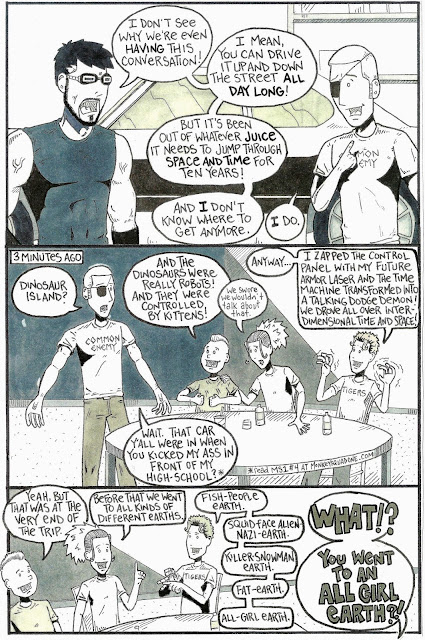 This scene was really tricky to write. It really relies on readers having read the earlier issues of MS1. See, the boys are recounting their off-world adventure from issue #4 to U.N.C.L.E. Doug. They mention visiting an All-Girl Earth in the Hot Rod Time Machine that they drove during the adventure & Doug immediately knows where he can get a Hot Rod Time Machine of his own because he used to ride in one when he was a member of Monkey Squad Zero. (Read the Monkey Squad Zero adventure from MS1 Annual #1 here.) Doug heard Brendan mention how he powered up the Hot Rod (which happened back in #4 here) and Doug realizes he's seen the car they're talking about before (back in #4 here) and puts it all together.
We'll see how he plans on powering up the Hot Rod Time Machine next week!

Page 3 also marks the first appearance of Professor Metropolis. I know in price guides & stuff they note if the character is "in shadow" but fuck technicalities, there he is.
We'll see more of him in the upcoming Monkey Squad One Annual #2!