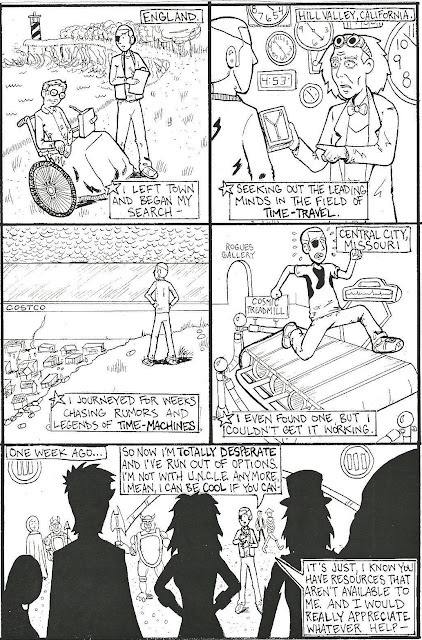 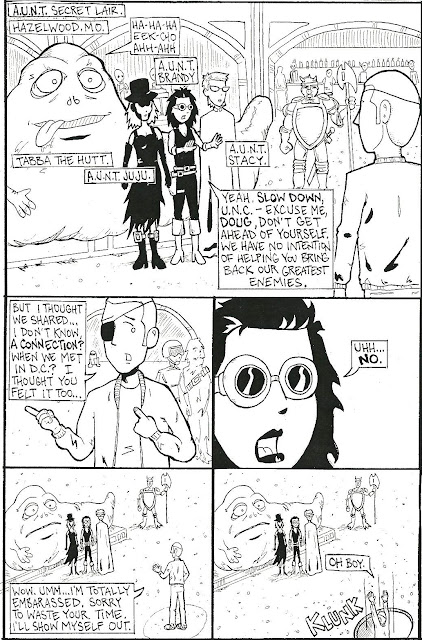 I'm pretty sure this is the most nerd-culture references I have ever done in such a concentrated area. So many references that I give you...
The Page 4 Reference Reference Breakdown!

Panel 1: Stephen Hawking.
Panel 2: Doc Emmett Brown.
Panel 3: The Costco from Idiocracy
Panel 4: The Cosmic Treadmill in the Flash Museum
And then as the mini-comic review site OpticalSloth.com put it, "Things devolve a bit into a Star Wars parody from there" (read the whole review here: http://www.opticalsloth.com/?p=17233)

That brings us to the introduction of A.U.N.T..
We met A.U.N.T. Brandy way back in Issue #2 (if you wanna see it: http://www.monkeysquadone.com/2011/12/monkey-squad-one-2-pages-2-3.html) and I've commented before that I made all women in my real life villains in my comic. This shit right here does not help my situation.
My real life Aunt Stacy is my mom's younger sister. She was once married to the real life Uncle Travis that the MS1 character U.N.C.L.E. Travis is based on.
"Aunt JuJu"  is what my nephews and nieces called my big sister Julie when they were babies. A.U.N.T. JuJu is based on Julie (who is real life Brendan's mom).
My other big sister Tabitha (real life Connor, Logan, Olivia and Madelyn's mom) was always called "Tab" and later "Tabba". When she was pregnant from 1999- 2007 I started calling her "Tabba the Hutt" and I thought it was hilarious to have her be an actual Hutt in the comic.
But I guess some people are over Star Wars gags.
A.U.N.T. Brandy had a hair & costume update since the last time we saw her. Goggles, 2 belts and Taskmaster boots? Yeah, buddy.
Page 5 also marks the first time I drew cleavage in the entire series.
Boobies rule.

NEXT WEEK: Guess who's in the pit?

Thanks for reading!
Posted by DougMichel at 8:43 PM